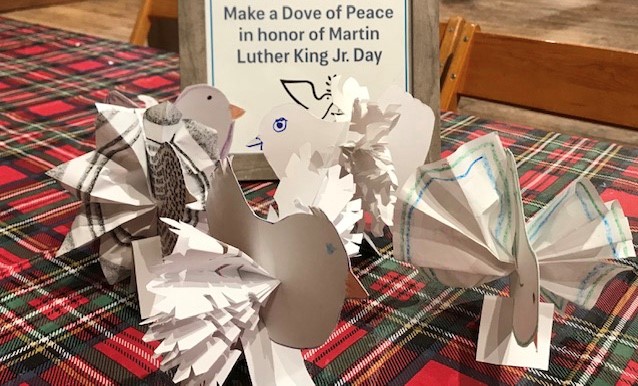 Billings Farm & Museum is open Jan. 14-16, 10am-4pm, for the Martin Luther King Jr. Day Weekend. Visitors of all ages can enjoy engaging activities indoors and out during the long weekend.

In observance of Martin Luther King Jr. Day, we will show A Time for Justice, the 38- minute award-winning documentary film by Charles Guggenheim that captures the spirit of the civil rights movement. The film will be shown daily in the Visitor Center and is included with admission.

The Woodstock Vermont Film Series will feature Citizen Ashe, which charts Arthur Ashe’s personal evolution from Grand Slam tennis champion to global activist against a tumultuous backdrop that included the civil rights movement, South African apartheid, and the AIDS epidemic. The film will be shown on Saturday and Sunday at 3PM in the Visitor Center Theater. A Q&A with the tennis historian and Ashe contemporary, Art Carrington, will follow the Saturday screening. (Film Series tickets are purchased separately.)

Create a dove of peace paper craft, try the Scavenger Hunt in the Farm Life Exhibits, and follow the StoryWalk along the pasture fence, featuring “Under and Over Snow.” Take a step back in history with a self-guided tour of the 1890 Farm Manager’s House.

Join our interpreters for farm and history programs at:

Horse-drawn Sleigh Rides will be offered on Monday, January 16, conditions permitting. Rides are approximately 10 minutes and are included with admission.

Meet the Farm’s animals including Jersey cows, sheep, chickens and goats all cozy in the Animal Barns. There will be daily milking starting at 3:15pm in the Cow Barn.

Explore the Billings Farm Trail on snowshoes or cross-country skis and venture through the picturesque snow-covered farm fields and along the Ottauquechee River. Bring your own or rent from the nearby Woodstock Inn & Resort Nordic Center. Bring your sled to speed down the small hill next to the orchard. Gather round the fire pit and warm up with hot chocolate, coffee and s’mores, available for purchase on site from 10am-3pm.