Sleigh Bells Ring: Are You Listening?

Come, let us travel back 130 years or so, to the time before automobiles.  Now, imagine walking down a snowy street.  The walkways are tramped down by previous passer-by.  The road is turned and churned by horse hooves and sleigh runners.  The air is crisp and cool, holding the promise of more snow fall.  The shops are lit from within, scattered bits of conversation leaking out when doors are opened.  And tinkling chimes are heard all around; the chimes of sleigh bells.  Bells heralding the coming of a magnificent sleigh, carrying joyous folk and proud horses tacked with the ringing bells.

Bells have various uses and purposes and are as old as time; or at least as old as bronze.  An early bell shape is similar to that of cow bells you may have seen around.  They were shaped like a four-sided pyramid, or quadrangular.  They were made of two plates of iron that were bent to form a corner each and then pieced together with iron rivets and coated in bronze (Hatch 13).  There is an example of one such bell held at the National Museum of Ireland, known as the Clog-an-eadhacta Phatraic or “The Bell of the Will of St. Patrick.”  The legend of the bell is that the sound was so frightful that no snake would have remained in Ireland to listen to the racket St. Patrick would have been making with his Clog-an-eadhacta; especially if they were akin to snakes of oriental origin that were addicted to sweet sounding flute music (Hatch 14).

Alas, we have digressed from the topic of this post; sleigh bells.  Sleigh bells have a different origin, and little has changed from the first.  What we call a sleigh bell was first known as a Crotal.  Spherical in shape with small holes and a ball inside.  The ball was once made of stone but is more commonly metal today (Hatch 15).  Eric Hatch, in his book The Little Book of Bells, notes the longevity and purity of the Crotal bell:

“The Crotal is a true bell form and is the most ancient of all forms.  The marked resemblance between the ancient and modern Crotal is extraordinary.  I cannot think of any other object that was created thousands of years ago in a form so perfect that no one since has been able to find a way of improving it.” (15)

Sleigh bells have had many uses in the past and in modern times.  They became a symbol of status and wealth; decorations on horse harnesses ad tack to display the wealth of the owner.  They were also viewed as good luck charms and wards against evil, disease, and injury.  They also served as a warning to pedestrians and other travelers.  The bells gave an obvious and early warning that there was an oncoming sleigh, giving time for people to get out of the sleigh’s path.  This was important because sleighs were not able to stop quickly, so listening for the bells was a matter of safety.  Vendors using horse drawn conveyances also used bells to signal they were in the area, much like a modern ice cream truck.

Songs such as Jingle Bells and Sleigh Ride use sleigh bells for lyrics as well as instruments for the song.  James Lord Pierpont compose One Horse Open Sleigh, more commonly known as Jingle Bells, in 1857.  The chorus of the song an example of onomatopoeia, “Jingle bells, jingle bells, jingle all the way,” is one show case of sleigh bells and their sound.  Jingle Bells is making use of the bell sounds to demonstrate the joy and cheer that the sound brings in the wintertime.  Sleigh Ride also uses sleigh bell sounds in the lyrics, “Ring tingle tingling too.”  Sleigh Ride is using the sound of the bells to keep a couple ensconced on their sleigh ride, alone but for each other.  Another classic winter song with sleigh bells is, Winter Wonderland.  Here the lyrics prompt for walkers to listen for the sound of the bells.  This first line, “Sleigh bells ring, are you listening?” sets the scene and mood for the walkers, prompting happiness; but it is also a nod to listen for the warning of an oncoming sleigh.

In the year 2020, 36 cultural institutions from every corner of Vermont will collaborate on a suite of exhibitions and events on the theme 2020 Vision: Seeing the World Through Technology.  Billings Farm & Museum will be participating through an installment of Windows to the Past and a Machine of the Month blog posting.  Check in regularly for updates and details on what we have to offer! 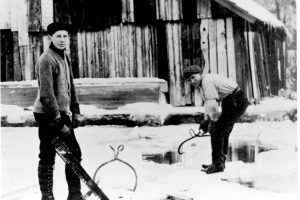 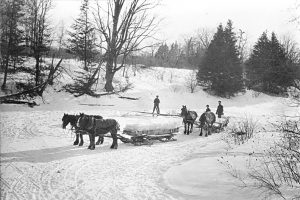 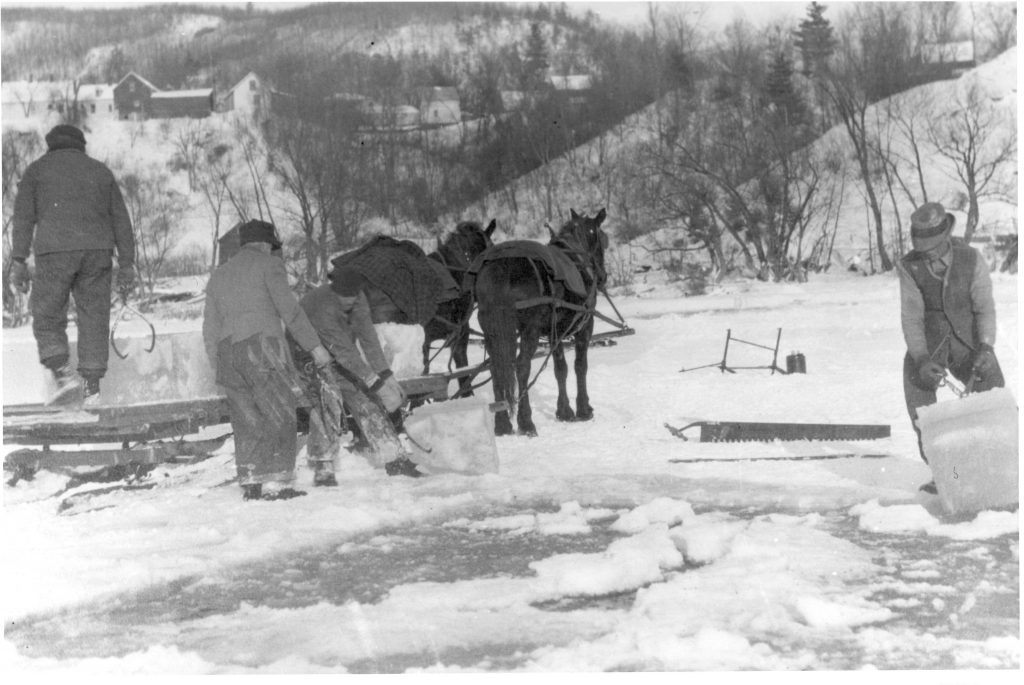 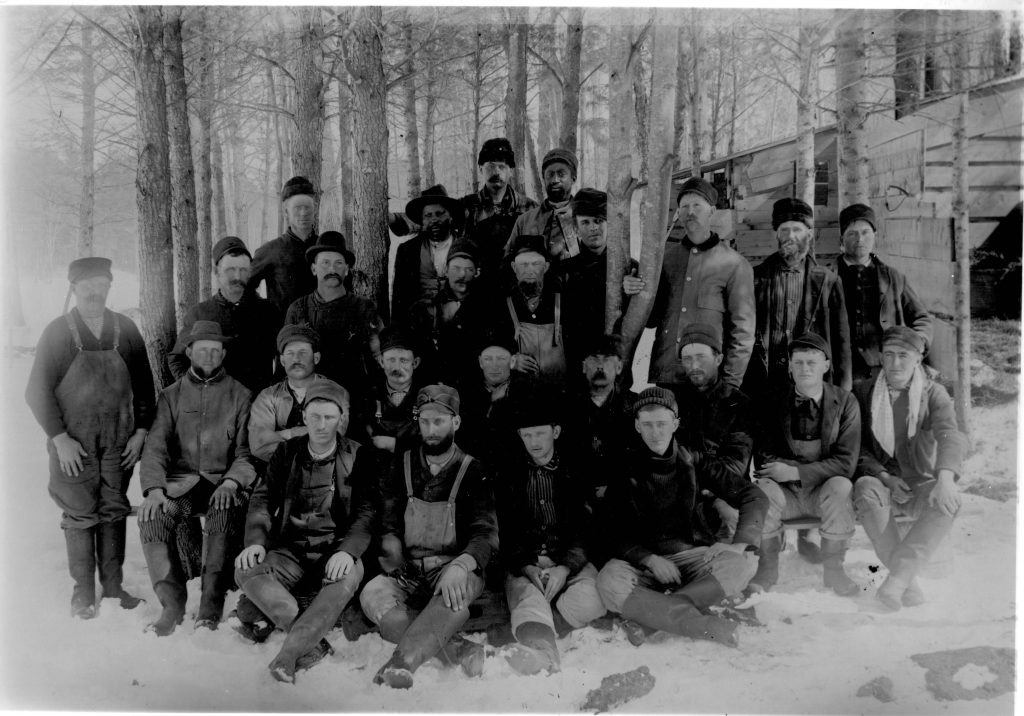 As January and February are Vermont’s two bitterest and coldest months, this blog post is focused on the technology and tools of ice cutting.

Winter has settled in and still has weeks before it lets go to warmer weather.  Farmers are idle without fields to tend, or are they?  In Vermont and the northeastern areas of the United States, farmers found a field that could be harvested during the coldest months, at least until refrigerators and freezers came to be.

The Billings Estate in the late 1800s had its own icehouse and access to a fresh water source; The Pogue on Mt. Tom.  The farmers that tended the fields spring to fall, found another field to harvest during January and February.  The ice that The Pogue produced was in their back yard and a downhill trip to the icehouse for storage.  The crew that worked The Pogue harvesting process numbered 20-30 men and used teams of horses from the farm.  The icehouse doubled as a storage space for the harvested ice and had a smaller room that stored could be used for cool storage for products, such as the butter made by the farm.

Before even contemplating a harvest, the ice needed to be thick enough: 2 inches of ice can support a man, 4 inches are necessary to support a horse, and 5 inches to support a horse and equipment (Seavey, 2016).  Ten to fourteen inches of ice was optimal for harvesting; regular ice depth measurements were taken of the ice field by using an auger to drill a hole and inserting a measuring rod with graduated markings.

Once the harvest got underway, there were a few key pieces of equipment that the men used.  Ice saws were used to hand cut the ice in to strips that were more manageable for later barring into smaller ice cakes.  The desired final ice cake dimension was 22 x 32 inches; a 12-inch thick ice cake weighed about 282 pounds while a 14-inch thick ice cake weighed about 319 pounds.  These hand cuts were previously grooved for easier cutting at widths of 22- or 33-inches, allowing the 4- to 5-foot-long saw to follow a straight path and break off the larger strips of ice.

The teeth of an ice saw were coarse and cut only on the down stroke.  Handles on the saws were perpendicular to the blade’s length, allowing for the sawyer to hold with two hands either side of the blade and keep themselves centered.  The motion the sawyer used was elliptical and an experienced sawyer could cut 1 linear inch of 12-inch-thick ice per stroke using most of the saw blade length (Seavey, 2016).  Working at 15 strokes a minute, a veteran sawyer could cut 75 feet of ice in an hour.

Another piece of equipment used during the harvest was a breaking bar.  Breaking bars had wedge-shaped blades, that when driven into the grooves in the ice strips could split the ice into the desired 22 x 32 inch ice cake.  The wielders of these breaking bars, barmen, would be stationed on a “bar bridge” that spanned the open channel and allowed for them to get the leverage needed.  They would drive their bar into the groove and apply a twisting force.  When the break bar was applied correctly, barmen were able to break the cakes off evenly and cleanly.  A clean break, and subsequently a clean cake, was better for storage.

Seavey, Aimee. “Cool Tradition: Its Crop Is No Longer Making Its Way to the Caribbean, but for One Maine Town, the Passing of Another New England Winter Is Marked, as It Has Been for Centuries, by the Harvesting of Ice.” Yankee, no. 1, 2016, p. 20. EBSCOhost, search.ebscohost.com/login.aspx?direct=true&db=edsggo&AN=edsgcl.439951523&site=eds-live&scope=site.